If you are having quality issues with your prints that might be due to a misalignment of some sort, we hope that this guide will help you to find the source of the problem. This guide contains some helpful pictures that show how configuring the EggBot in different ways can produce different outcomes. 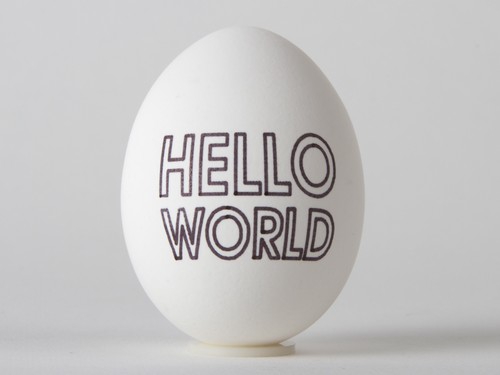 This is the test file that we'll be using for our examples. Note that the print quality is fine and consistent. The "O's" have closed shapes, the vertical parts are vertical, the horizontal parts are horizontal, the slants of the "W's" have consistent width, and so forth. (Some of the examples that we'll show later do not have these properties!)

You can download the example file here. (TODO: ADD LINK)

This was printed with the Deluxe EggBot on a chicken egg with an Ultra Fine Point Sharpie. The egg was oriented with its "fat" side pointing towards the egg motor (headstock).

The print settings were as follows: 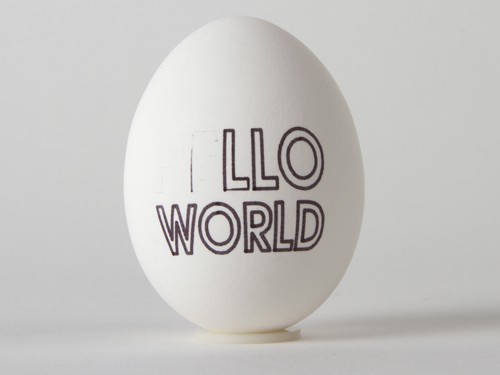 A common error that tends to happen when using old pens, or pens that have been left un-capped. It is easy to fix this problem by taking a scratch piece of paper and, right before you start your EggBot, bleeding your pen a little on the paper to get the ink flowing again.

Alignment of the egg in the egg cups

This skewed image is the result of misaligning the egg within the couplers, like so: 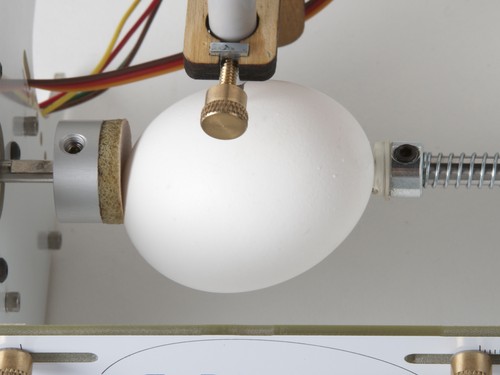 In order to avoid this you should place the egg between the couplers with the egg as flush as you can get it against each coupler. To check if the egg is properly aligned, you twist one of the couplers and watch for any wobbling as the egg rotates. Adjust the egg until there is as little wobbling as possible. It should look something like this: 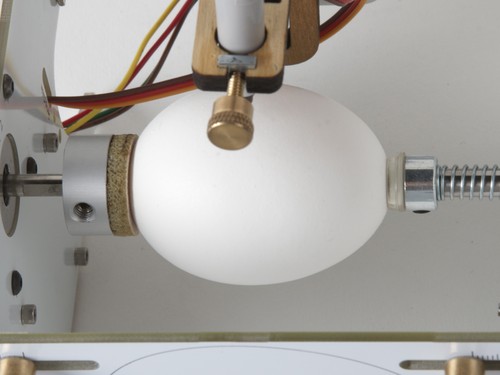 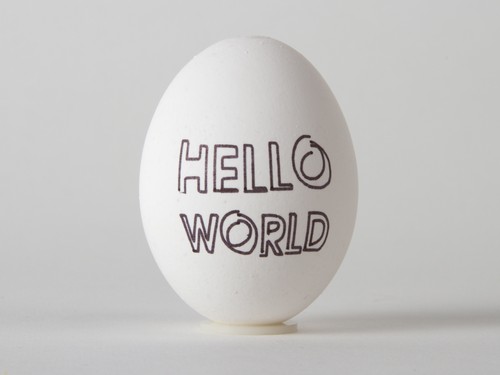 This is the cause of the screw under the pen arm being loose.

This is what happens when the screw on the back of the distill pen arm is very loose. 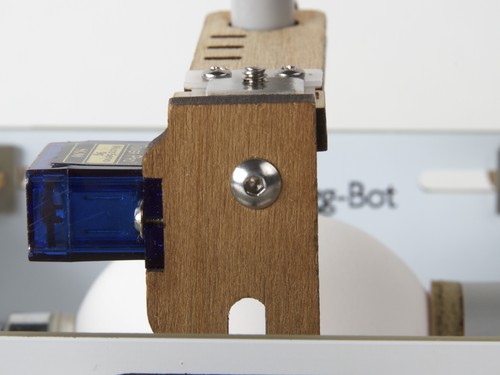 This also causes the pen arm to be dragged left to right as the EggBot prints. However, this screw has to be considerably loose to have this kind of result. To check, twist the pen arm left and right. It can move a little, but it should not be able to move when using very gentle force. 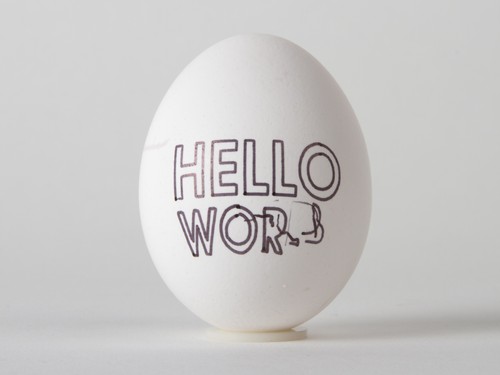 This happens when the screw that holds the pen in place is loose. 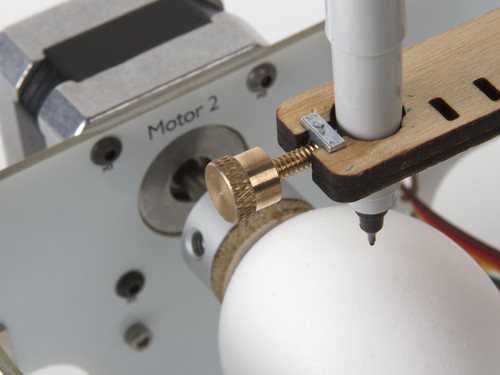 Yet, the screw has to be extremely loose, enough so that the pen can come out of its bindings will printing. To check if the pen is securely fastened, pull up on the pen gently. If it is fastened correctly, then it should not come out.

Vertical position of the pen motor 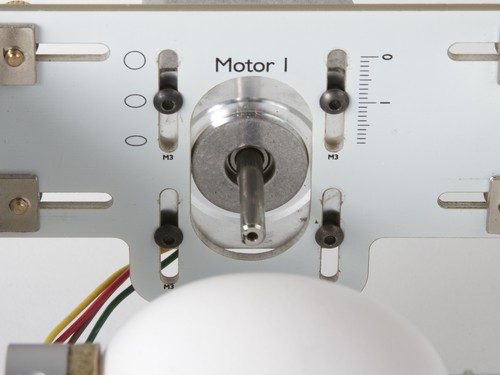 The pen motor can be moved vertically to adjust the pen arm for drawing on oblong surfaces or circular surfaces. Here is an example of the pen motor being in the right position for a chicken egg. For a sphere, position the motor at the very top of its slots. For a more elongated egg (maybe a turkey egg?) you may need to go lower yet in the slots.

This change in aspect ratio is the result of the pen motor being positioned too high. 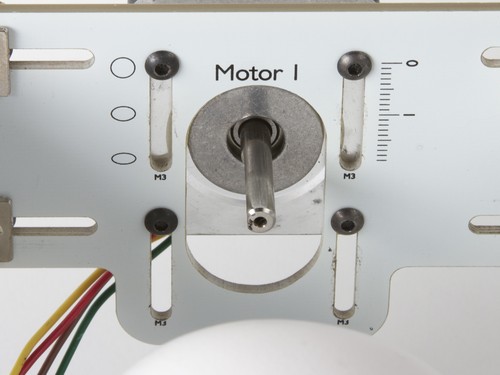 This one is because the pen motor was to low 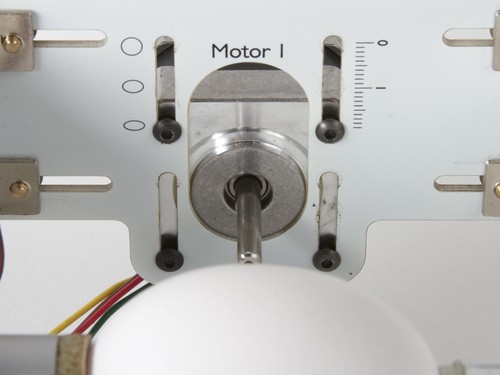 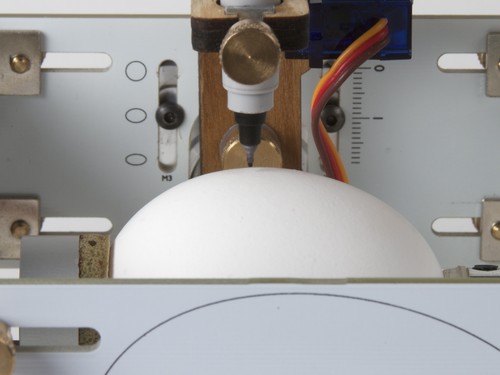 When the headstock is correction positioned, the shaft of the pen motor points directly toward the thickest part of the egg (or sphere), as shown here

When the headstock and tailstock are placed too far to the left, you may get distortion. 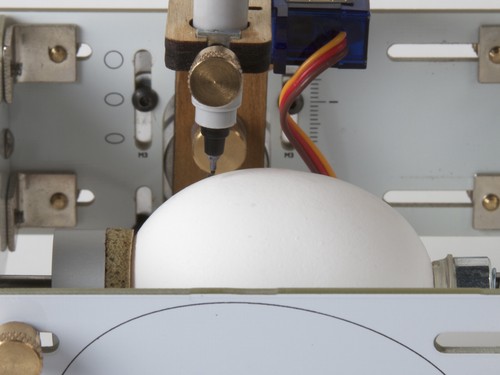 This one when the headstock and tailstock were placed too far to the right. 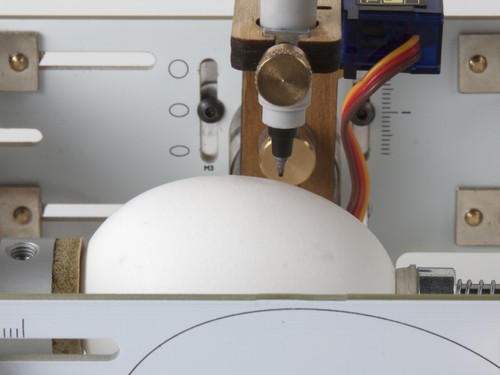 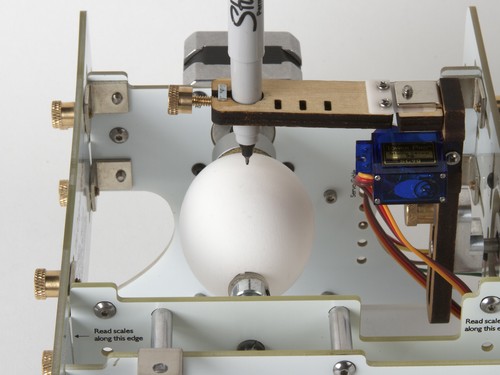 When the distal pen arm is in the correct vertical position-- essentially flat when it the pen is contacting the egg -- the tip of the pen should point directly towards the thickest part of the egg. If it does not, that may indicate that the pen arm backer is in the wrong position and that you need to move the whole pen arm closer to, or further from, the pen motor.

This pen arm backer is in the correct position, since pen points at the thickest part of the egg. 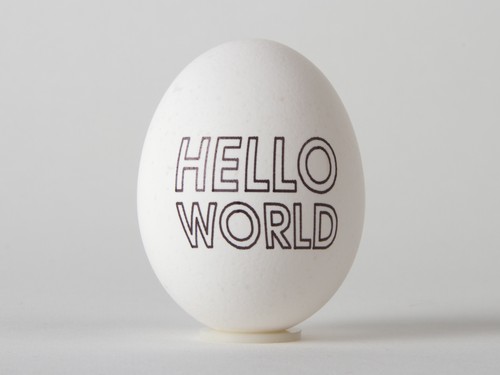 This is the result of the backer being inward too much, making the drawing curved to the right. 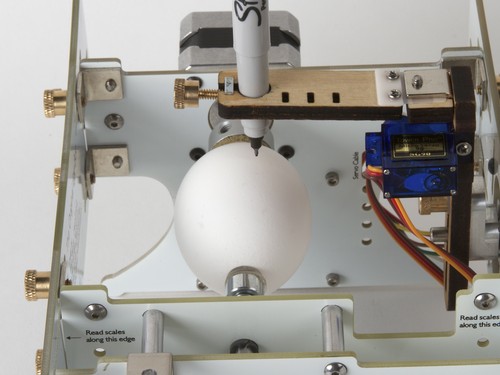 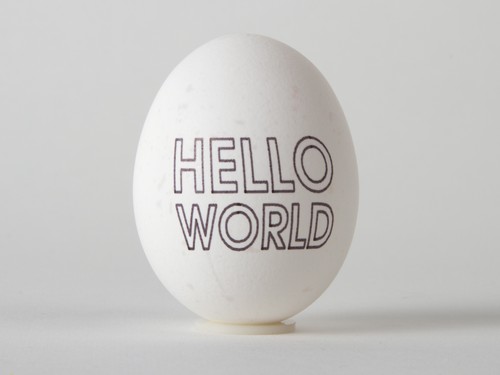 this is when the backer os too far outward, causing the drawing to be curved to the left. 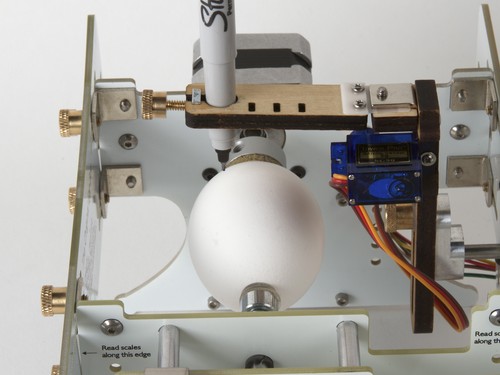 Pen arm not flat when in the down position 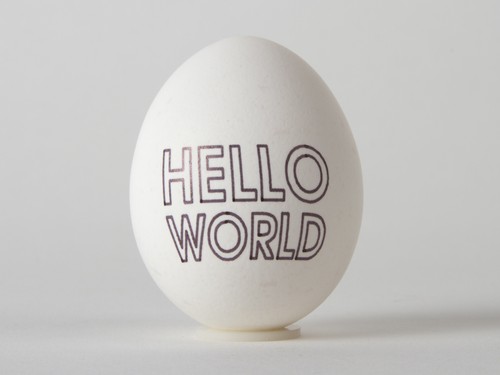 This occurs when the pen arm is not horizontal when in the down position, causing the pen to be skewed. The drawings can then come out slightly distorted. This is similar to when the backer is misaligned.

This drawing is a test of what the outcome should be when everything goes correctly. 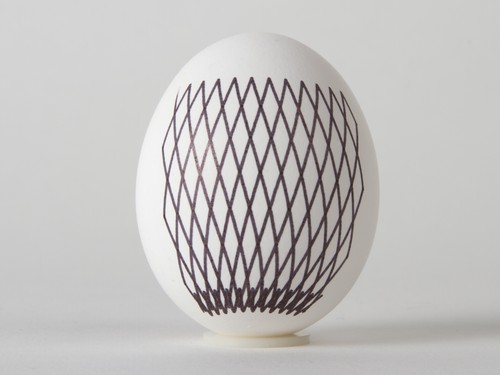 This one is when the starting position of the pen arm was off and the pen arm bumped into the side of the EggBot. With the pen arm not being allowed to go any further, the EggBot continued the drawing at the position it was stuck at. 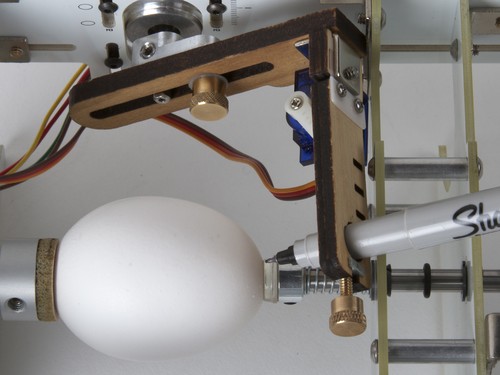 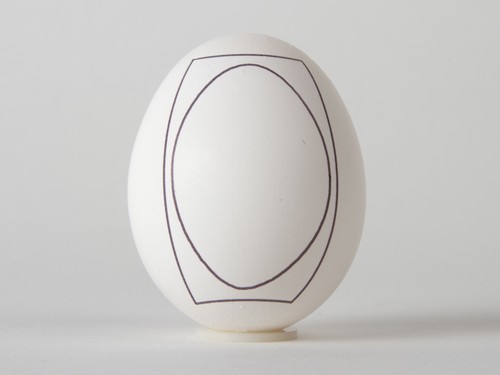 This is an example of the distortion created when trying to draw a circle in a square on an egg and a spherical ornament. 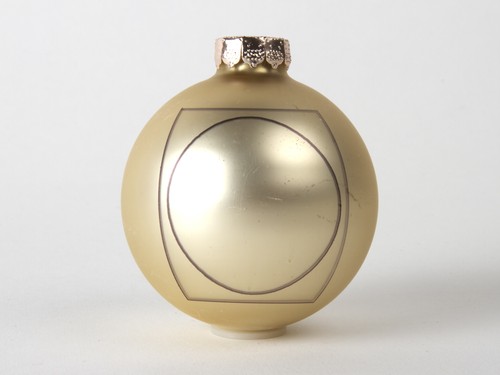 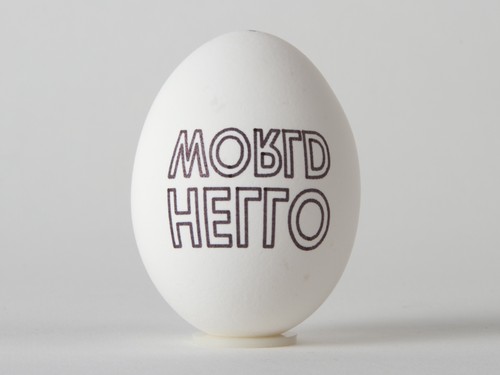 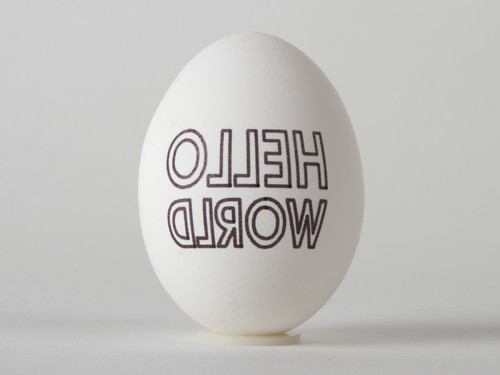 This mirrored image of "Hello World" is the result of "Reverse motion of Motor 2 (egg)" being left unchecked while the "fat" end of the egg is in the headstock, and vice versa. 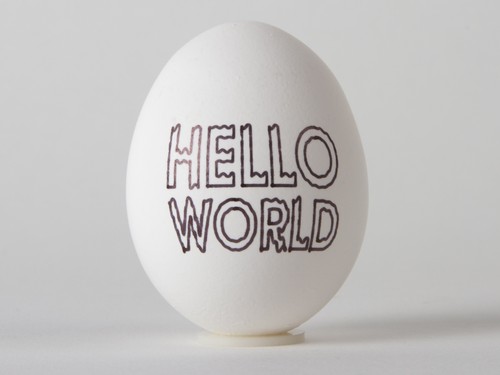 This is the result of the "Speed when pen is down" setting being set to 700 steps/s, which is too fast to create a neat drawing. The speed of the motor caused the lines to be jagged. 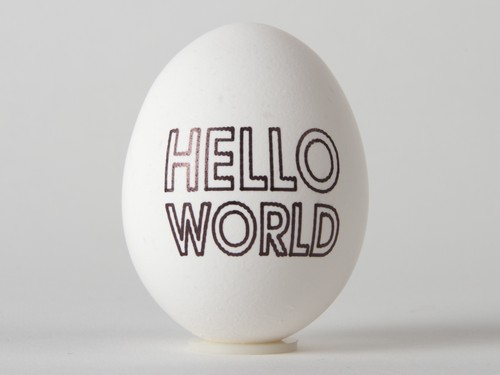 With the "Speed when the pen is down" setting set to 500 steps/s, while it is an improvement, is still too fast. There are still jagged lines. 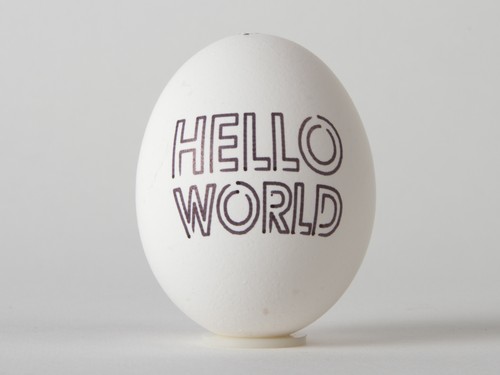 This happens when the "Delay after lowering pen" setting is set too low. The EggBot will start to commence the drawing before the pen has actually made contact with the egg, leaving gaps in your drawings. 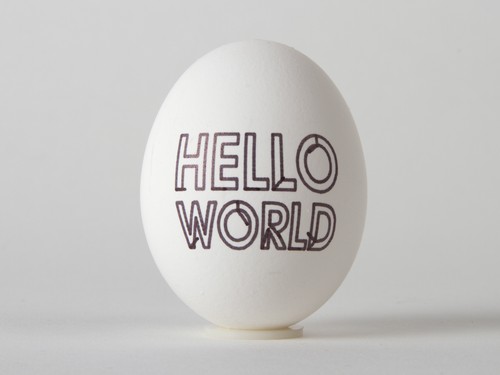 This is when the "Delay after raising pen" setting is set too low. The EggBot will start to move to the next destination before the pen is lifted off of the egg, leaving stray marks.