So now you have your EggBot assembled and connected, and you've installed Inkscape and the EggBot extension (and any necessary USB drivers). How do you get set up to draw with the EggBot? This page has the essential details that you need to get started, along with a video that walks you through most of it.

The EggBot Control extension for Inkscape is the tool that you will use to help you test and align the EggBot, as well as transfer your drawings to an egg. First you'll need to start Inkscape. Once Inkscape is running, you'll have an Extensions menu, and on that menu will be a submenu labeled Eggbot. If you do not see an Eggbot submenu, you have not yet correctly installed the extensions; please back up and carefully follow the instructions for installing the extensions.

In the Eggbot submenu are several different extensions that perform various Eggbot-related tasks. By far the most important of these is the Eggbot Control... extension, which is the program that actually communicates with the Eggbot.

The Eggbot Control dialog has eight tabs. The first two tabs, "Plot" and "Setup" provide the basic controls to set up and use the Eggbot. The other six tabs provide a variety of advanced options and information.

Prepare your EggBot for drawing on eggs[edit]

Your first instinct will be to put a pen in the pen arm, put an egg in the egg cups, and start drawing. This is an excellent way to frustrate yourself and ruin an egg. Instead, you want to be able to place an egg in the egg cups such that the egg is evenly aligned, and the pen tip will have consistent contact with the egg as it rotates.

1. Calibrate the pen up/pen down positions. 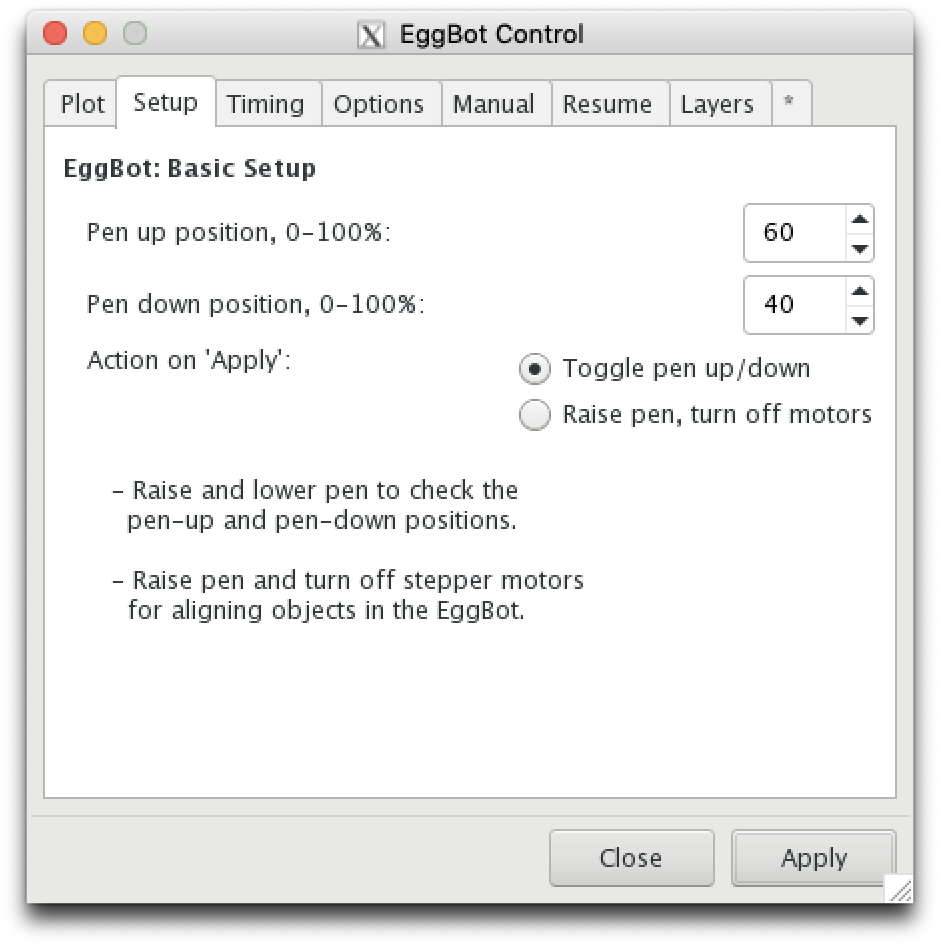 If your servo motor does not move, check that it's connected to the right location and that the EBB has both power (from the plug in power supply) and the USB connection to your computer.

2. Set the motors. From the Setup tab, select Raise pen, turn off motors, then click Apply. This will unlock the motors, leaving them free to rotate, with the pen arm in the right position to put a pen over the egg.

3. Set the pen arm arc depth. That is to say, a different setup is needed if you're printing on a sphere (like a golf ball) than if you're printing on an egg-shaped object. The pen motor mounts with screws through slots, so that the depth of its drawing arc can be changed. On the inside of the chassis sidewall, there's a gauge and some simple illustrations indicating rough positions for the motor. A chicken egg will typically use the center position; a sphere or nearly-spherical glass bulb (such as a standard lightbulb or a christmas ornament) will use the top position; a duck or goose egg may need the bottom position. Gently loosen the screws, slide the motor to the correct height, and then gently tighten the screws.

7. Mount An Egg in the EggBot. (Obviously doesn't have to be an egg, per se. But we tend to call an object in the Egg-Bot an "egg," since it sounds better than "spherical or ellipsoidal print media.") See the section below for how to mount the egg in the 'bot.

8. Set the pen arm height. Adjust the pen height such that the pen such that the tip is just above (say, 1-3 millimeters) the surface of the egg when it is in the "up" position. To do this, you may need to raise or lower the pen arm, by loosening the thumbscrew that holds the proximal pen arm to the pen arm backer, and then tightening it when the pen is in the right place. For finer adjustment, you can loosen the thumbscrew that mounts the pen into the distal pen arm, and adjust the pen itself up or down to the correct position. Once you think that you have the pen arm right, it's helpful to swivel the pen arm back and forth over the egg to check clearance.

Mount An Egg in the EggBot[edit]

It's best to start with a document that's 800 pixels tall by 3200 pixels wide -- you can use the Eggbot Template from the set of example files as a good starting point. Eggbot draws paths -- continuous lines -- not bitmap images, and not solid filled regions. Certain object types are automatically treated as paths, for example circles and rectangles. Other types of objects that are made of lines -- like outlined text -- may need to be converted to paths (Path menu > Object to path) before plotting. A good first plot might be the "Hello world" example file.

(If you have not already, you may also want to download the EggBot Examples from the EggBot Releases page.)

If your stepper motors (Motor 1 and Motor 2) are weak, make high-pitch whining noises, exhibit jittery behavior, or produce inconsistent step sizes, you probably need to adjust the current setting on the EBB.

We've put together a 15-minute video walking you through the process of setting up the servo motor positions, aligning an object in the bot, and making your first plot. You can watch it on YouTube here.

So far, you've learned how to make a very simple drawing with a single color of ink. Our Smiley Face Tutorial is an excellent "next step" for learning more about your Eggbot, and how to print with multiple colors.

(In short, keep different color information in separate layers of your Inkscape document. Give each layer a name that starts with a number, for example, 1-red, or 2-black. Use the Layers tab to plot a single layer at a time, changing the pen between layer plots.)