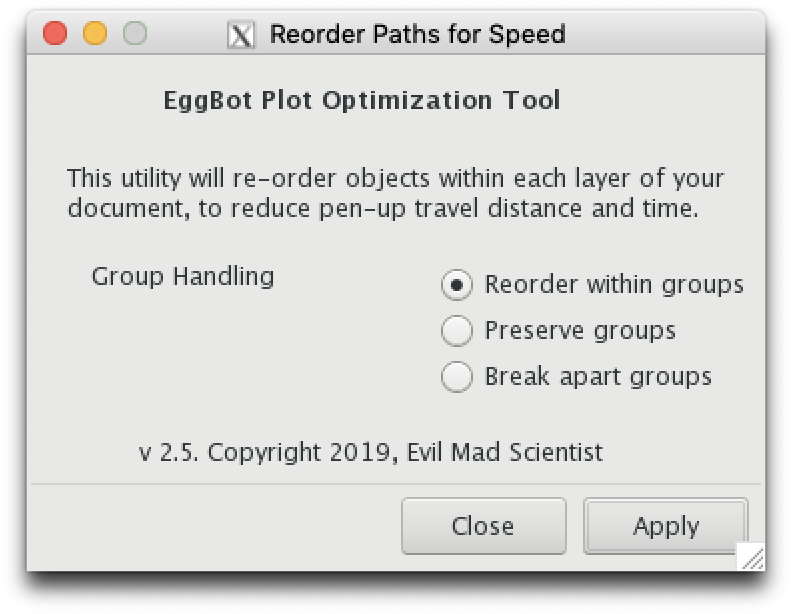 In normal use, and by default, elements within a document are plotted in the same order in which they appear in the file. This order is generally the order in which the objects were created; it might also be referred to as “bottom to top.” For example, suppose that you draw a circle and then a rectangle. Then, when you plot the file, the EggBot will plot the two objects in the order that you created them: The circle will plot before the rectangle. The rectangle in this example can also be described as being “above” the circle— a description that makes sense if you imagine painting one object and then painting the other on top of it. You can use the tools in the Object menu to rearrange the order of objects, for example with the Object > Raise and Object > Lower menu commands. If you raise our example circle above the rectangle, then the rectangle will plot before the circle.

This extension can re-order the objects in your plot so as to reduce the travel time spent with the pen up. Experimentation has shown that it can often reduce plotting time by 30% or more.

Using this extension does impact your Inkscape drawing. This extension changes the order in which pieces of your drawing are drawn. For the Eggbot, this should produce no visual change in the finished plot.

The first option, Reorder within groups will re-order objects and groups within each layer of your document. Grouped objects will remain grouped. But, objects (and other groups) within any given group will be re-ordered.

The second option, Preserve groups will re-order elements and groups within any given layer of your document, but the order of elements with groups will not be altered.

The third option, Break apart groups will ungroup all elements within each layer of your document and then re-order them for speed. This option removes the groups from your file.