Important note: Spiral Wrapped Text is no longer supported. It is still available in our repository for manual installation. 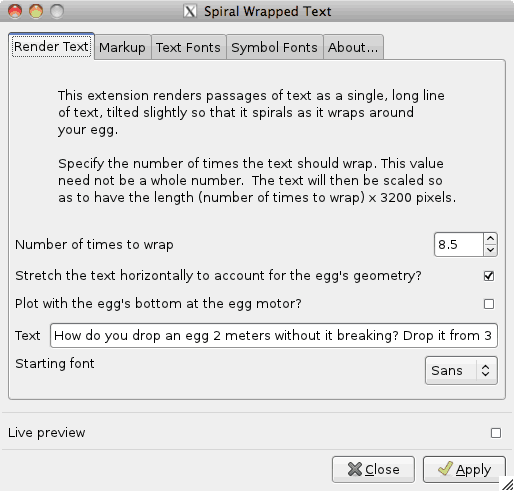 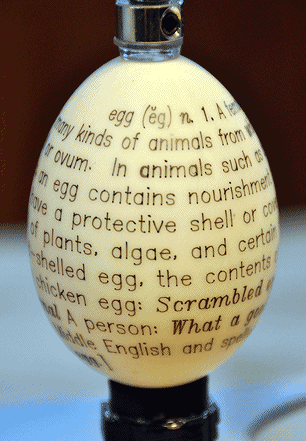 Creating text which gently spirals around an egg makes for a fun and striking design. Make an egg with a favorite poem, text passage, or even an egg related recipe! This extension will automatically size your text to achieve a desired number of wraps around your egg. The text itself is drawn with vector fonts selected for use with the Eggbot [1]. The fonts are drawn as paths: they do not need to be converted to paths before plotting.

Type the desired text in the extension's "Text" input field and then enter the number of times to wrap the text around the egg. You may optionally select one of three font styles: Sans, Times, or Script. If your text uses the characters "&" or "<" then they must be entered as "&amp;" or "&lt;", respectively. Before plotting on an egg, ensure that the option "Egg (x) axis wraps around" is checked in the Eggbot Control extension's "Options" tab.

The number of times to wrap need not be a whole number: you may use values such as 8.5. The extension sizes the text to achieve the necessary overall length. For instance, if you enter 8.5, then the text will have an overall length of 8.5 × 3200 pixels. Consequently, the more number of times the text wraps around the egg, the larger the size of the text. If the text seems too small, just increase the amount of wrapping. Conversely, if it is too large, decrease the amount wrapping. Note that if the text scales to too large of a size, then the wrapped text may overlap between wraps. If this occurs, decrease the size of the text by decreasing the amount of wrapping.

Changing fonts and other markup[edit]

For example, to select one of the three font families Sans, Times, or Roman, use

To make the text bold, emphasized, or italicized, use the markup

These markups may be combined. For example,

To select specific fonts, use the markups shown below. Again, the font names are as per the Hershey Text extension.

As noted above, any of the 29 EMS fonts in the newer version of the Hershey Text extension can be invoked using markup which gives the name of the font in all lower-case without spaces.

To see examples of a given font, use the Hershey Text extension to draw samples.

To rotate the text 180 degrees turning it upside down, check the "Plot with the egg's bottom at the egg motor?" checkbox. You do not need to use this option if you have reversed the motion of both motors in the Options tab of the Eggbot Control extension.

1. For more information on these fonts, please see Hershey Text.
2. On Mac OS X, this can be difficult: you need to change the X11 preferences to allow cut and paste operations between the clipboard and pasteboard. This, however, is not a mode you want to leave enabled as it causes cut and paste operations on elements in your Inkscape drawings to work incorrectly.
3. This horizontal compression is a result of the egg's horizontal or equatorial circumference being less than its pole-to-pole circumference.